Saturday, June 4th, was a good day out on the water despite some persistent fog that seeped the color out of the photos below (I’ve increased the contrast and color on most of these, because posting photos in grey and black doesn’t really appeal to me.)

After we found a couple grey whales northbound near Point Bonita, we visited the Farallon Islands, and on our return we were treated to breaching humpbacks right where the shipping lanes diverge, about 12 miles or so offshore from San Francisco: 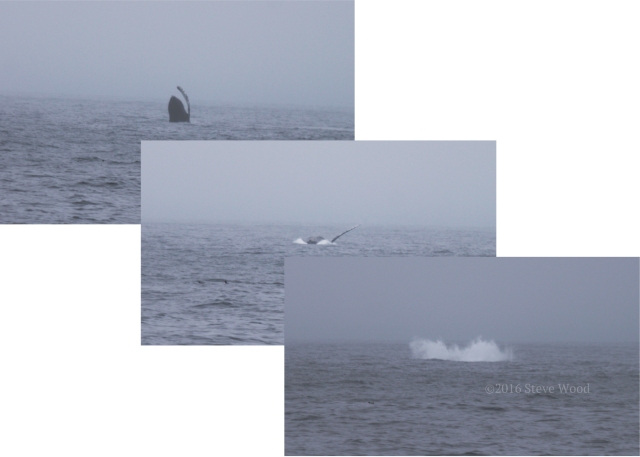 Unfortunately, they only breached a couple times while in view, and the fog took a lot of the drama out of these photos. Still, it’s always a treat when whales decide to show a little more of their bodies off than we can usually see.

Breaching wasn’t enough, though. Soon one of the whales transitioned into pectoral slapping – taking its 15-foot long pectoral fin up out of the water to slap down on the surface:

Here the whale is on its side, back facing the camera, and it slapped its fin down repeatedly, making a great splash each time. The most likely reason for this behavior is the big splash and associated noise – sounds that carry long-distance are the most efficient ways for whales to signal each other. We can’t know what information the signals convey, because even the same signal can have different meanings due to context. Since the whales are most likely feeding in this area, it may have to do with finding food. Another possibility is that it may have to do with our boat driving up, since the change in signaling behavior happened just as we arrived.

Our day wasn’t over yet, though! In addition to humpback whale behavior, we also got treated to dolphins, which were very hard to photograph.

These are part of a pod of common dolphins that numbered between 100-150 animals, so it was impossible to get the whole pod in one frame. With only a few on the surface at a time, it was a little difficult to guess where to look, but they were a great treat to see.