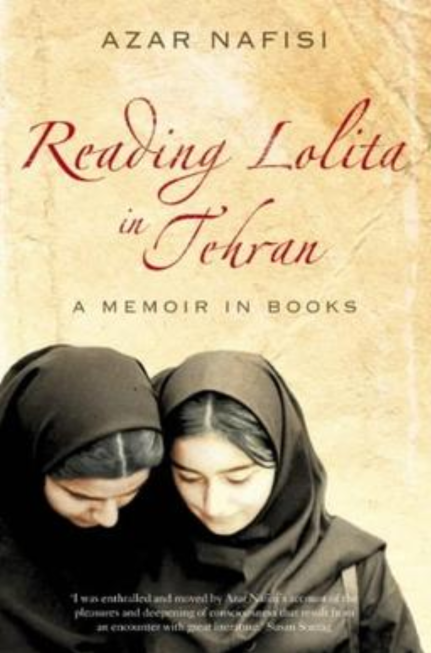 There’s a recursive strangeness to reading about an English professor in a foreign country when your own native language is English. It helps highlight the weirdness that must be Iran after the Revolution – a place where The Great Gatsby is immoral because apparently censors can’t figure out that Gatsby’s not a hero.

I wanted to feel like this memoir would be enheartening – and there is something uplifting and optimistic about Nafisi’s obvious love for the written word. She understands the moral, social, and psychological nuance that make Nabokov, Fitzgerald, James, and Austen relevant and powerful even centuries after their works were written. I wish that I had as comprehensive an understanding of the art generated in my own native tongue, but sadly I lack her grounding and knowledge of our greatest writers.

Mostly, I found myself with anger at those who would deny people the simple pleasures – the novels in the book, of course, but also the examples of people arrested at holiday on the Caspian Sea because they were hanging out in mixed company, religious police empowered to search for satellite TV dishes and hidden alcohol, and self-righteous students’ organizations that deny their members an education by forcing out professors deemed ‘insufficiently revolutionary’ regardless of what those professors may actually be trying to teach. This anger is in part due to the political moment we find ourselves in right now – a Religious Right becoming ascendant in Presidential politics and on the Supreme Court. It’s not an Iranian problem that moralizing busybodies will throw ideas like freedom and individuality into the maelstrom to further their own power; it’s a human problem and we see our own class of opportunists who see the tribe of “the religious” as a natural base for their political ambitions here in the US.

I wanted to get more out of this book, but the anger blinded me to most of it, and I don’t think that anger was what Nafisi was trying to generate with her memoir; her love of literature comes across too strongly, and you don’t build a base of anger upon a fascination with the written word. I can only hope for liberation for Iran – that Persians will soon live in a society that permits them to read what they might like, watch what they might like, and hang out with whoever they might like. And hope that the rest of the world doesn’t backslide as the Iranians work their way there.