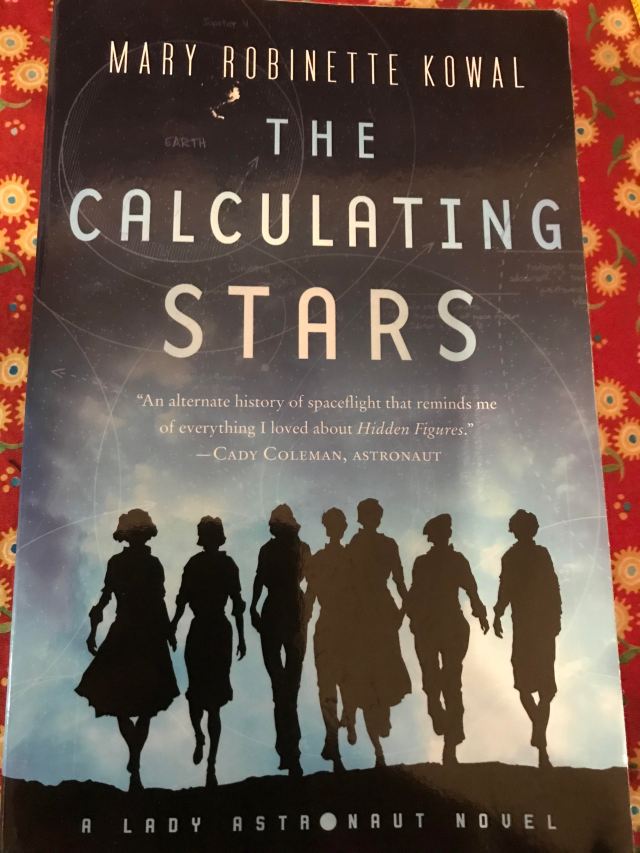 Kowal drops a meteor on Washington, D.C. in the opening act of her novel. First, great way to generate some excitement (I also appreciate that she handles it with much more sensitivity than Independence Day handled the destruction of major American cities,) and second a great way to begin an alternate history story without resorting to the cliche of “this war turned out differently” that dominates the genre.

Pretty quickly Kowal pivots from the disaster (although the characters continue to see the after-effects of the Meteor and hold remembrances on Meteor Day) because that’s not what this book is about. The purpose behind the huge deviation from our timeline with a meteor impact taking out Washington, D.C.? To get the space program started earlier. The meteor hits in an alternate 1952 (Dewey is president instead of Truman,) and Elma York is a mathematician working for NACA (NASA’s precursor organization.) She survives the impact during a weekend in the Poconos with her husband, Nathaniel, an engineer who also works for NACA. Soon after the impact, Elma calculates a value for the massive amount of heat the kinetic energy from the meteor added to the Earth, and while the exact values are not revealed in the book, the expected results are startling.

Initially the soot output from uncontrollable wildfires and the impact cool the Earth’s climate for a couple years, much as volcanic eruptions have done in the recent past. After a few years though, the heat added to the Earth’s systems will tend to increase the temperature of the atmosphere, eventually to the point where life on Earth might not be possible (the numbers are a little vague here.)

People from Earth will need an escape route – and that route is into space. So the nascent space program is jump-started by a massive investment from the reformed government in Kansas City. Not only the United States, but many other nations take part in this new space program, and in the early years of its development, Elma York is a computer (the term used for mathematicians, mostly women, who did the hard work of calculation in the days before electronic and mechanical computers were reliable enough or inexpensive enough.)

The central tension of the novel comes when Elma realizes that she’d like to be an astronaut, and that the new situation, where everyone will eventually have to evacuate from Earth, demands that women are allowed to travel into space just as the men are.

Stetson Parker, the prototypical military-pilot-and-first-man-in-space, is a serious antagonist in this, as is the bureaucracy of the new U.N.-managed space agency.

A secondary struggle is Elma’s struggle with herself. Like many, she suffers from impostor syndrome, self-doubt, and a near-crippling anxiety. Her struggles with her own mind’s work to sabotage her efforts provide a running counterpoint to the successes she experiences during the story.

She also does (mostly) good work as an ally of black astronauts and pilots, whose valuable contributions are constantly devalued in the continuing Jim Crow Era of the 1950s, and while she means well, Elma finds it hard to understand and follow the struggles of those who face far more overt and violent oppression. The tone of some of these sections indicate some areas where Kowal has some difficulty successfully duplicating the voices of struggling minorities – it seems like she made it too easy on Elma.

In all, I would recommend this book – great story with great characters, and a good way of showing a more inclusive Space Race than we had in our own history. The biggest change I would make is to avoid too many puns in the private moments between Elma and her husband – it may be the relationship some people have, but it’s a little grinding on the reader after too many.

Ingray Auskjold has a problem, and it’s fair to say that the scheme she begins the book with; freeing a prisoner from the anarchic “Compassionate Removal” and whisking him away to their homeworld, Hwae, will not solve it. Nor will solving the murder that occurs later in the book, or even winning the affections of the romantic interest character for her. I like this about Ann Leckie’s writing – that she is talented at creating characters whose concerns reveal that they have not read the blurb on the back of their own book’s dust jacket, but are living some sort of life both inside and outside the pages of the book they’re in.

Ingray isn’t always thinking about the events that dominate Provenance for her, she’s thinking about life, and that’s unusual enough in a novel’s protagonist that it feels oddly disconcerting. She has concerns beyond those of the immediate crisis; she’s not just trying to survive to Tuesday (well, she is trying to survive to see another day) but she is also realizing that she has to think about next month, next year, and what she really wants as a direction in life. Especially in science fiction, there are a lot of protagonists who do not reliably think about, or try to create, their futures. Mark Whatney from The Martian has reason to be so short-focused, and is believable in that context, but is Case from Neuromancer really thinking about career choices and his life beyond the MacGuffin that will free him? Or Hiro from Snow Crash? Do either of them wonder what will happen when the family gets together again for the holidays next December?

Science fiction and fantasy plots have a tendency to place their characters in situations where the immediate concerns of survival and crisis resolution absorb all the waking moments the characters have, leaving nothing for the concerns that an actual human might have for the long-term future: if you have to stop the runaway robot right now, or you have to save the world from the Dark Lich, that leaves very little room for the questions “who am I?” and “what do I want?” (nod to the Shadows and the Vorlons there.) But Ingray is wrestling with this, and as a reader who absorbs a lot of ‘standard’ science fiction and fantasy, this feels unusually strange to me. I only realized upon coming to the end of the book why it felt strange to me, and how I have for so long thought about characters who seem now unfairly stunted in their thoughts and planning in my reading. Coming to Provenance after so much Asimov and Robert Charles Wilson, authors I like, but who do not have the same talent Leckie has for characters that want to thrive after the events in their books wrap up. This might be what brings me to enjoy the characterization in a very different author, Adam Rakunas, who I might not otherwise compare to Leckie, but whose characters also want something that will tempt them from after the last page of the novel.

It reads as though Leckie is recreating science fiction in some ways, and just as surprisingly as Katherine Addison did with The Goblin Emperor, she’s writing books that pull it off. Those scenes that fans of an older form of science fiction writing might decry as ‘boring’ and that aren’t immediately related to the action that the characters are a part of; those scenes are important to Ingray, and that’s what makes them essential to this book.

I think a little about my own life, and how little I have in common with Fraa Erasmus or with Susan Calvin; and while I love those characters, it’s not my fault that I don’t see myself in them – I wasn’t designed to be in them, or them in me. There’s more than a little of myself that I can find in Ingray Auskjold, though, and that’s both a good thing for the character and a healthy thing for the novel Provenance. It’s not really a sci-fi escape caper, a murder mystery, or a thriller, although elements of those genres are found throughout the book, but those elements are all a part of the coming of age of a woman from a very different culture who needs to make her own way in her world, and find out how to go from where she’s been to where she needs to be, just as we need to make our own way in ours.